A copy of Leonardo da Vinci's bronze horse has chosen Michigan as its stomping ground at the Frederik Meijer Gardens.

GRAND RAPIDS, MICH. Leonardo da Vinci never did get to see his horse come in.

Although he drew up plans for a mammoth 7.3-metre bronze horse for his hometown of Milan more than 500 years ago, his clay model was destroyed by the invading French.

Today, Leo as he was known in the old neighbourhood could see his design fulfilled in his hometown in Italy. Or just 580 kilometres down the road from Toronto in Grand Rapids, Mich.

U.S. grocery store magnate Frederik Meijer helped sponsor the creation of Leonardo da Vincis horse in Milan. Meijer also thought his hometown could also use a spectacular sculpture of da Vincis horse.
Thats why Grand Rapids has an exact copy of the Milan statue. In Michigan its called the American Horse.

A team of Clydesdales pulled a shroud off the huge sculpture in September 1999. Time Magazine declared the horse sculpture one of the 10 best international designs of that year.

It stands in Frederik Meijer Gardens & Sculpture Park where Meijer and his wife have deposited much of their private sculpture collection. The garden is a 51-hectare nature preserve where large sculptures by some of Americas finest artists are lurking among the forests and wetlands. You can walk the boardwalk trails, or ride an open tram through the park.

Many more fine creations are displayed in various indoor galleries, plus copies of da Vincis own drawings for his horse. There is also a detailed description about how the 15-ton horse was created.

But be careful where you walk. The greenhouse is also home to Kiwi, the little birds from New Zealand that cant fly. They skitter amidst your feet.

Frederik Meijer Gardens hosts a wide variety of flower and plant shows each spring. And in April the place is alive with butterflies, which will eventually be released from the glass dome to make their way south.

The sculpture park is on East Beltline Ave. N.E., just off Interstate 96 on the Toronto side of Grand Rapids. Its open every day until 5 p.m. and until 9 p.m. on Thursday during the summer months. Admission is $12 (all figures U.S.) for adults and $9 for seniors.

Frederik Meijer isnt the only local boy to do well. Grand Rapids was also home to President Gerald Ford and his wife, Betty. His presidential library has been built on the west bank of the Grand River in downtown Grand Rapids.

Meijer had a portion of the original Berlin Wall built in the lobby of Fords presidential museum. It also features holdings from Washingtons Smithsonian Museum, which circulates many of its materials and displays through the Grand Rapids facility the centrepiece of an eight-hectare riverside park in the heart of an attractive downtown core. 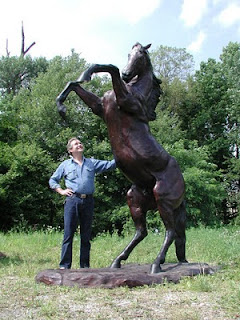 Need your own monumental statue? We can make your custom piece a reality! We also have a large selection equestrian related pieces available!

Posted by www.AllClassics.com at 1:45 PM