Dressing up your town with a bronze sculpture

From Grass Roots Movement to World-Class Exhibit White Plains, NY - Beginning five years ago as a "grass roots" movement to put sculpture in White Plains' public space, the city's Sculpture Committee has come of age. With the 62-piece, 30-year retrospective of American master sculptor David Hayes, art in White Plains has overgrown its sculpture gardens and spread into a veritable city-wide museum, sprouting shape and color in public and private space throughout the city's suburban neighborhoods and downtown residences and businesses.

White Plains Mayor Joseph Delfino has fully embraced the arts throughout his 11-year administration and is one of the Hayes exhibit's most vocal fans. "An important measure of a city's greatness is it's dedication to the arts, which, to me, is our heart and soul," he said. "Outdoor art unifies a city in a way that transcends words. Whether we like a piece or not, we react to it, and, over time, we become accustomed to it. It becomes part of who we are as a community."

One of America's great living contemporary sculptors, Mr. Hayes creates dynamic art from flat sheets of painted steel, welded and bolted into forms inspired by nature. Mr. Hayes himself, his sons David M. and John, and his granddaughter Alexandra, along with crew members of the White Plains Department of Public Works and volunteers from local neighborhoods, houses of worship and schools, have assembled the pieces in puzzle-like fashion one at a time. Eli Schonberger, an ebullient 80-plus-year old who won't let two knee replacements get in the way of his skiing, is as committed to the Sculpture Committee as he is to the slopes. It was he who planted one of the first seeds of the "grass roots" art movement and he who approached David Hayes with an idea that has resulted in the largest outdoor exhibit for both the city and the artist.

Schonberger and Mayor Delfino have reached out to corporate sponsors to support the sculpture installation. The RPW Group, Inc., Heyman Properties and Belway Electric are the exhibit's current major supporters who have gotten the exhibit off the ground. More funding is needed but Schonberger is optimistic about the future. "We're hoping this newest city-wide exhibition will now generate financial support so that we can continue our efforts," he said. Hayes' works are included in the permanent collections of prominent museums around the world including the Guggenheim and the Museum of Modern Art in New York City. The year-long White Plains exhibit is open to the public 24 hours a day, seven days a week. The exhibit has been extended to November of 2010. 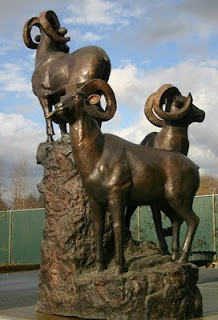 If you want to add a work of art to your town's parks or public areas, but don't have the budget for "artist" fees, check out our large in-stock selection of bronze statues, fountains, and sculptures. We can also do custom pieces!

Posted by www.AllClassics.com at 2:34 PM