Archaeologists unearthed a sculpture fragments of a man's head and a small torso dating from to the Early Roman period during recent excavations of the ancient Stobi site in central Macedonia.

The discoveries, found at the temple building which has been undergoing archaeological excavations, are rare and important, as they will shed light on the life of people during that period, archaeologist Silvana Blahzevska, Director of the National Institution Stobi, explained, cited by the Vecer newspaper.

"The way the hair and the face of the found head were made, as well as the ap

pearance of the remaining part of the sculpture, suggest that it was of an emperor or an important citizen who lived in the first century," Blazhevka stated.
Archaeologists expect that the find will help them learn more about the temple which has been continuously robbed since antiquity . about whom it was dedicated to and when it was constructed.

According to Blazhevska, so far there was no detailed information on the temple, whose roof was entirely destroyed and whose floor was covered with rubble from different time periods. Since a Russian coin from 1863 was found at the site, according to the arcaheologist, the temple was thought to have been fully plundered, but now, fortunately, it turns out that the first floor has not been touched.

The excavations at the ancient site of Stobi are being carried out by a team of 65 archaeologists and 400 workers.

Director of the Cultural Heritage Protection Office Pasko Kuzman told the publication that many other archaeological sites, in addition to Stobi, will continue to be excavated this year, while Minister of Culture Elizabeta Kancheska . Milevska said that work at the site will continue as long as the weather conditions allow.

The ancient town of Stobi, which developed from a Paeonian settlement established in the Archaic period, is located on the main road that leads from the Danube to the Aegean Sea and is considered by many to be the most famous archaeological site in the Republic of Macedonia. 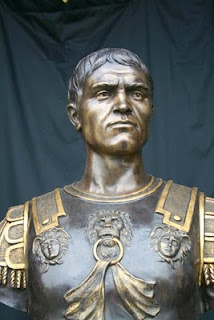 If you'd like a piece of Roman sculpture check out our replicas of Caesar, Perseus slaying Medusa, or the fabled Capitoline Wolf!

Posted by www.AllClassics.com at 10:50 AM