EBBSFLEET VALLEY, KENT THAMESIDE, UK - Artist Mark Wallinger's White Horse is 33 times life-size and, overlooking the A2 in the Ebbsfleet Valley, will be seen by up to 60 million people a year.

The backers of the project, Eurostar, Land Securities and London & Continental Railways, have so far injected around £1 million of seed funding to get the project off the ground.

Wallinger said: "This is a tremendously exciting project. I was honoured that my White Horse won the competition and I am delighted that Gravesham Borough Council has granted it planning permission. The team and I are very much looking forward to creating a new landmark for the area."

Project Director Mark Davy said the sculpture would "act as an important catalyst for the cultural identity of the area".

"Ebbsfleet Valley will be a major new mixed-use development, which is set to become a hub for an emerging new economy in the South-east," he added.

Other parties involved in the project include engineer Alliance Design Group. 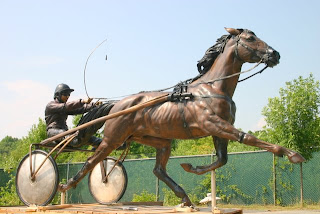 If you're interested in something a bit smaller, say lifesize, check out our selection of lifesize horses. We have several styles for the equestrian enthusiast.

Posted by www.AllClassics.com at 10:34 AM