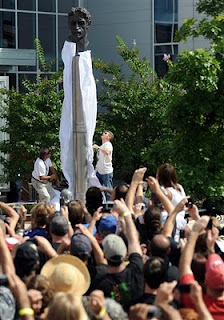 BALTIMORE - Rocker Frank Zappa was born in Baltimore but gained greater popular acclaim in Europe than in the United States. On Sunday, devout European fans of the late musician brought his mustachioed likeness back home in the form of a bronze bust.

Several hundred fans gathered on a sweltering afternoon as city officials dedicated the bust of the ponytailed rocker outside an east Baltimore library. The bust is a replica of another in a public square in Vilnius, Lithuania, and was donated to the city by Zappa enthusiasts in the small Baltic nation.

"The spirit of Frank Zappa is alive and well in Baltimore," Mayor Stephanie Rawlings-Blake said.

The mayor joined Zappa's widow, Gail, and three of his grown children in watching as a curtain was drawn back to reveal the bust set atop a 12-foot steel pole. Later, Zappa's son, Dweezil, took the stage with his tribute band, Zappa Plays Zappa.

Zappa was known for everything from novelty rock songs to elaborate classical compositions. He died of prostate cancer in 1993 at 52.

Sunday's ceremony marked the 25th anniversary of Zappa's testimony before Congress on freedom of expression for recording artists, though the scheduling was coincidental. Zappa had testified against proposed warning labels about lyrical content, calling them a path to censorshiop.

Libraries were a vital resource for Zappa, who had no formal music education, Gail Zappa told The Associated Press in a recent interview.

Zappa would have appreciated the bizarre way he came to be honored in his birthplace, his widow said. Zappa's songs were known for their quirky, humorous lyrics: One of his biggest hits was "Don't Eat the Yellow Snow." Yet his music was also a favorite of the avant-garde.

"He'd be wildly amused by this, because of the absurdity of these guys in Lithuania coming up with this phenomenal sculptor who normally does busts of Stalin," Gail Zappa said.

Zappa's daughter, Diva, choked up while addressing a throng that chanted Zappa's name.

"Thank you so much for just loving my dad," she said.

Also at the ceremony were the mayor of Vilnius and Saulius Paukstys, the longtime president of a Lithuanian Zappa fan club who commissioned the original statue.

He has described the effort to erect the bust in Vilnius in the early 1990s as a test of the former Soviet republic's fledgling independence. The Baltimore dedication, he said, was a great day "for art, the human mind and democracy."

Helen Urban, 61, of Silver Spring, was among the Zappa fans in the crowd and saw the original bust during a trip to Lithuania last year. The replica is in a better location, Urban said.

"They have it sitting in the parking lot of a hospital," she said. "It's ugly as sin, but it's cool."

Gail Zappa, on the other hand, finds it beautiful.

"The guy was inspired," she said of sculptor Konstantinas Bogdanas. "It's more than a likeness. It captured the force of his personality and his will in terms of being an artist." 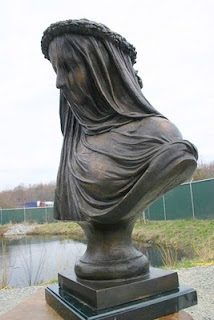 If you'd like a custom bronze bust made, like the veiled Madonna pictured above, we can work with you and make your vision into a reality. We'll take images of the person you'd like memorialized and create a bronze bust that will last many generations, and, we'll do it at a price you can afford.

Posted by www.AllClassics.com at 10:07 AM