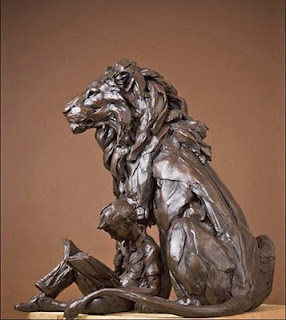 Drivers on Main Street in Westminster will soon notice an addition to the downtown decor.

A life-size bronze lion will be sitting like a majestic sentinel atop a granite pedestal near the entrance of the Westminster Library.

"It really was a library-inspired piece," said Lisa Back, a spokeswoman for the Carroll County Public Library system.

"At the base of the lion is a young boy who is reading a book," she said. "It's a physical representation of books transporting us to other worlds."

The sculpture "Wild Imaginings" was created by Westminster artist Bart Walter, who's been a full-time professional sculptor for three decades, during which time he's done about a dozen pieces of this scale.

"We thought it was important to use local artists to keep it tied to the community," Back said.

The lion will sit atop a polished, black granite pedestal that's about 3 feet tall. The top of the lion will be about 8 feet above ground level.

"I'm sure visitors will notice the lion first, and I hope it will communicate a real lion to them," said Walter, who has created works for The Smithsonian National Zoo, in Washington, the National Museum of Wildlife Art, in Jackson Hole, Wyo., the Maryland Zoo, in Baltimore, and Northwest Middle School, in Taneytown.

"But then they'll notice the boy and wonder about the boy in the context of a lion, and hopefully think about reading and how it can transport you to anywhere you want to be," he said.

"For children, hopefully it will open up their imagination," he said.

Walter knows what it's like to be transported by books.

"I grew up in Baltimore," he said. "I was stuck in the city all week and I became a mental traveler through books."

Walter's sculpture will be unveiled Friday, Sept. 17, at 3 p.m. at a ribbon cutting ceremony celebrating the completion of the library's renovation.

The Westminster branch is 30 years old, Back said.

"It was showing its age inside as well as outside," she said. Over the course of about three years, the library's roof has been replaced, lighting was improved, accessibility and walkways were improved, and the public spaces inside were renovated, including the children's area.

"You go through a tunnel to go into the children's area," Back said.

The cost of the renovation, not including the sculpture, was around $1.6 million, paid for with a state grant and with matching funds from the county.

"The final stage is the re-landscaping of the park in front of the branch," Back said.

The sculpture was paid for with private donations -- with a healthy discount from the artist himself, who said normally, a piece this size can run hundreds of thousands of dollars.

"We did it as a favor to a local institution that we enjoy and have enjoyed for a long time," Walter said. "I was just trying to help them make it happen."

The sculpture echoes a tradition of putting lion statues at the entrances of buildings.

"Sculptures have been used as guardians of libraries and art museums for well over 100 years," Walter said.

Some notable examples of lion statues as guardians are at the New York Public Library and at the Baltimore Museum of Art, putting the Westminster branch among grand company.

"Coming to the library should be more of an event than an errand," Back said.

"Wild Imaginings" is the first of four sculptures the Westminster branch library hopes to purchase from local artists.

The next piece will be carved on site next summer from limestone contributed by the Lehigh Cement Company in Union Bridge. The library is still searching for an artist and an artwork for that block of stone, Back said. 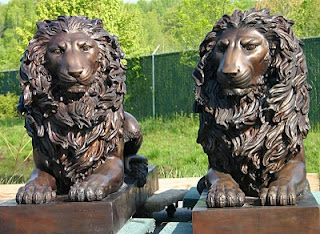 If your entrance needs a lion, or two, we have what you're looking for. Like our "Majestic Lions" pictured above, we can make your entranceway, public area, park, or landscape really stand out. Check out our website for all our beautiful lions and other animals.

Posted by www.AllClassics.com at 10:45 AM