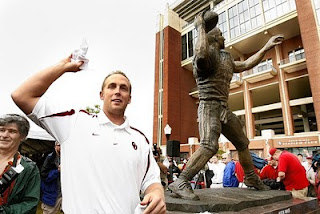 Enough With the Statues, Already

There's nothing wrong with commissioning a statue in honor of the late Alabama football coach Paul "Bear" Bryant, who is universally regarded as one of the icons of college football.

Anyone who doesn't have a heart of stone would have supported Marshall's decision to display a memorial to the members of the 1970 football team who died in a plane crash.

But when a conversation about football statuary starts to veer toward the likes of Nick Saban, Danny Wuerffel and Tim Tebow, it's probably time to stop, locate the nearest paper bag and breathe into it.

If you need any more evidence that college football is in the midst of a new era of blind extravagance and euphoric self-congratulation, all you have to do is start counting statues.

A growing number of schools across the nation have decided they aren't content to reward winning coaches by paying them millions of dollars—or to honor their recent star players by retiring jersey numbers. The latest technique is to send a few still photos to the neighborhood sculptor.

By the end of the season, Alabama hopes to honor its current football coach of three seasons, Mr. Saban, with a statue outside Bryant-Denny Stadium in Tuscaloosa. This is something the school has done for its other national-title-winning coaches. It was initially thought the statue might be up already, but it's still being molded because earlier renderings weren't quite right. "It looked like Robert De Niro," a school official said.

Oklahoma, meanwhile, is becoming statue central. Four of the Sooners' Heisman winners have gotten them since 2005; a fifth, of 2008 winner Sam Bradford, is on the way. Oklahoma also plans statues of four of its coaches over the next year, including Bob Stoops, the current coach.

The schools say the statues dress up stadiums, giving them a formal "front door" that celebrates their history. They say fans delight in snapping photos of the statues. They also note that these artworks are paid for in an appropriate manner: Mr. Saban's statue, which will cost about $50,000, is being funded by the Crimson Tide Foundation via private donations. So it's not like tuition increases are supporting this. "I'd just say that, right or wrong, the thing that brings a lot of immediate attention to a university is its athletic programs," says Alabama athletic director Mal Moore. "It's a way of recognizing that success."

It's obviously debatable, of course—especially in the case of Mr. Saban, who was coaching at rival LSU just a few seasons ago. "Saban statue is too much, too soon," said the headline of a Birmingham News column earlier this year.

"It's a dangerous precedent about the statement of football over academics," says author Chris Warner, an LSU alumnus and SEC football fan who wrote a book about conference tailgating. "We're building monuments to coaches. It's a pretty good indicator of where we are."

Traditionally, statues have been erected for football legends long after their playing careers or after decades of service, like the late Grambling coach Eddie Robinson, who had a museum opened in his memory in February on the school's Louisiana campus. Penn State's 83-year-old coach Joe Paterno, whose 18th-ranked Nittany Lions visit Mr. Saban's top-ranked Tide in a highly anticipated game on Saturday, had a statue unveiled in his honor in 2001.

Others have been immortalized in bronze or stone after a tragic death. Nebraska found a way to honor a revered former coach in tandem with a fallen former player: A 2006 statue depicts Tom Osborne, the school's all-time winningest coach, instructing quarterback Brook Berringer, who died in a 1996 plane crash at age 22.

Two years ago, Syracuse unveiled a statue of star running back Ernie Davis, the first black Heisman winner, who died of leukemia less than two years after winning the 1961 award. It was a fine subject, but there was just one problem: The statue depicted Davis wearing modern football equipment, including Nike shoes. (Nike didn't exist when Davis played.) The mistake was later corrected.

In 2003, Washington honored former coach Jim Owens with a statue, an event that spurred an NAACP protest. Mr. Owens had been accused of racism in 1969 for suspending four black players for a perceived lack of loyalty. Mr. Owens, who died last year, apologized at the unveiling.

Some subjects have approached these honors with humility. Mr. Wuerffel, the former Florida star, now works with Desire Street Ministries, a group that works to transform inner-city neighborhoods through what it calls "spiritual development." He says statues on campus shouldn't be limited to football players like him. "There are countless unsung heroes in our world that don't get the public attention that athletes and entertainers do."

"You don't have the statue there to idolize," says ESPN analyst and former Notre Dame coach Lou Holtz, who received one in 2008. "You have it to remind people of the tradition."

Mr. Saban's planned statue is a symbol of changing times. It used to be that no Alabama coach was worthy of mention in the same breath as Bryant, an Alabama player who returned and won six national titles there. But Bryant has been gone so long—he died in 1983—that Mr. Saban is all many Alabama students know, says Paul Finebaum, a Birmingham radio host and columnist.

And so public opinion about the Saban statue, which Mr. Finebaum says is mostly in favor, is somewhat split by age. "People 50 or above say, 'I don't have a problem with it, but don't you think we ought to wait?' " says Mr. Finebaum. "The young people wonder: Why doesn't he have a statue already?" 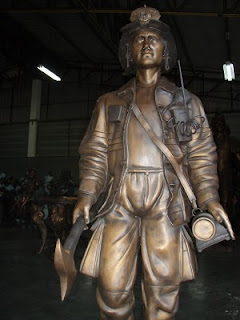 If you'd like to memorialize a sports figure, local hero, or mascot and you want a quality piece at an affordable price, we're the solution! We have done many custom pieces, like the one pictured above, and we can work with you to make your vision a reality. Even if it's another sports figure! Check out our website to see all of our great pieces and to check out more of our custom work.

Posted by www.AllClassics.com at 10:17 AM