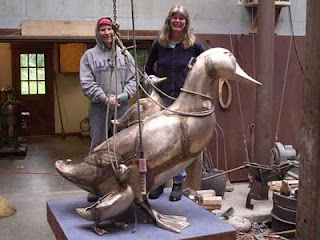 The spirit that led Terry Reim to become one of University Place's biggest supporters is imbued in a bronze duck sculpture that will soon be dedicated in his honor at a place that was still a civic dream when he died.

Reim and his friend Dixie Harris founded the Duck Parade about a decade ago to generate foot traffic for a farmers market, another of their initiatives from the same period. While the farmers market is gone for now, the Duck Daze event continues each June, with participants dressing up like ducks to celebrate the end of the rainy season.

The affinity between Reim and the waterfowl doesn't end there. Like a duck paddling in water, those who knew him say he worked tirelessly while yielding results that looked effortless.

Reim's widow, Ruthann Reim McCaffree, said his mantra was to "move ahead and get things done."

"He was intense and complicated," she said. "He loved this community."

Reim was a strong proponent of University Place's incorporation and wanted to grow the tax base of the fledgling city - a goal officials aim to realize when their Town Center project finally opens on Bridgeport Way.

Plans for Town Center were just starting to take shape when Reim died at age 61 in April 2003. He fell off a ladder while remodeling his home.

Reim couldn't have anticipated that a sculpture built in his honor would be one of the first completed pieces of the development.

The first major tenant arrives in February, when The Pierce County Library System plans to open its new 15,000-square-foot library inside a civic building.

Meanwhile, construction continues on that building, which also will feature the future City Hall, ground-floor retail space and underground parking. The city also plans to sell about a dozen lots slated for mixed-use development around the building.

Drawing on his background as a developer and home builder, Reim led the city's economic development task force and its local chamber of commerce.

Councilman Ken Grassi recalled that Reim once promised cherries at the farmers market. When the vendor couldn't make it, Reim drove to Eastern Washington to pick up the cherries, drove back and ran the booth himself.

The sculpture captures Reim's deliberative manner, featuring a 41/2-foot-high male duck marching forward with a young duck on his back, its wings held out to keep balance. Walking beside the male duck is another duckling.

The nonprofit group UP for Art, working with Reim's widow and the city, commissioned sculptor Georgia Gerber to create the piece after an open competition.

The sculpture's cost is $30,000. UP for Art and the Terry Reim Memorial Fund donated $15,000. The city is contributing the remaining half from a state grant dedicated for the market square development.

Gerber, a sculptor from Whidbey Island, said the statue symbolizes Reim's drive and the whimsy of the events he helped create. She said her work also touches on themes of family and is "for the public to enjoy forever and embrace as a part of their community."

Reim McCaffree is pleased with Gerber's work. "I can't say enough about her. She took it to the whole next level."

The Reims were fixtures in University Place for the better part of their 40-year marriage, well before UP became a city in 1995.

The couple rented a home there in 1965, after Terry was drafted and ordered to report to Fort Lewis. After he completed his military service, the couple returned in 1968 to raise their family.

Reim McCaffree said the sculpture can be a metaphor for the city of nearly 31,000 residents.

"We're scrambling ... We're working hard to become a top-notch city for the people who live here and come here," she said. "I think the duck symbolizes that spirit, as well." 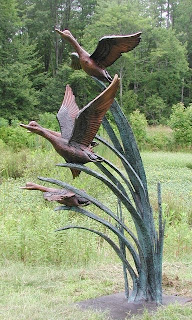 If you like ducks or other waterfowl we can help. At bigbronze.com we have a great selection of wild bird sculptures and fountains at wholesale pricing. We can also do custom pieces upon request if you'd like something bigger, like the piece by Ms. Gerber. You can see all our available pieces here!

Posted by www.AllClassics.com at 1:14 PM