Graffiti a concern for Buddha Sculpture 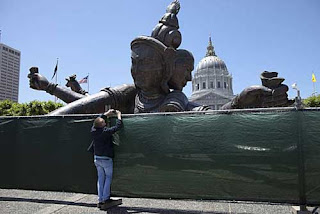 The 15-ton, three-headed copper sculpture that was unveiled in Civic Center Plaza last month for the 30th anniversary of San Francisco's sister-city relationship with Shanghai has already been defaced twice by graffiti.

Officials retained an art restorer to remove the tags, including one scrawl proclaiming, "Jesus is the one."

Now, City Hall fears that the giant Buddha may prove too inviting to booze-fueled partygoers from the nearby World Cup big screen telecasts and Gay Priders looking for a little climbing fun during their upcoming post-parade party.

So the $1.6 million sculpture, on loan from artist Zhang Huan, is in protective custody for the next three weeks, surrounded by a 6-foot-tall screened fence to deter climbers and anyone else. 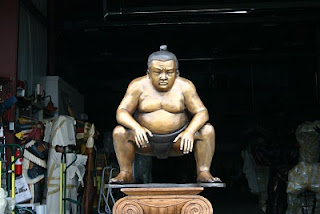 If you want a buddha for your home, we have what you need! Check out OURS here!

Posted by www.AllClassics.com at 10:15 AM