ORLEANS - To Mike Cannon, who frequently catches a few hours in the sun on Rock Harbor beach, it was like the angel suddenly appeared.

"I think it's amazing. I was here last week and I didn't even see it," he said, gazing up at the 13-foot-tall bronze sculpture on top of the bell tower at the Church of the Transfiguration at the Community of Jesus.

The detailed 4,000-pound angel by sculptress Daphné Du Barry was lifted by crane to the top of the 100-foot-high campanile Friday and bolted to a pre-cast platform. It marks the capstone of a decade of artwork centered on, and in, the church, that began with its dedication in 2000.

"It really was the goal to have all of the art installed by the 10th anniversary, and with one small exception, we are there," said Chris Kanaga, the community's project manager for construction and artwork.

Except for a few war memorials, Orleans isn't blessed with many public sculptures. Local churches tend to have modest vanes or crucifixes atop their steeples, so the sight of a bronze angel, more than twice the height of a man, hovering above the treeline in a very public spot could have potentially generated some controversy.

Kanaga said Du Barry, who has considerable experience in public sculpture, did a lot of research in scaling the size of the angel to the tower. The figure is intended to represent a passage from the Book of Revelation in which there is an angel for every church, Kanaga said. It depicts the angel as if it has just landed on the roof of the bell tower, its gaze cast downward on the bronze doors of the church.

No one on the Rock Harbor pier yesterday found any fault with it.

Leah Detellis was eating lunch with her son Connor, 2.

"I think of angels as pretty inoffensive," she said. Detellis didn't feel the angel and the church tower were out of scale with their surroundings.

"The tower is barely above the treeline," she said.

Another woman thought the angel gave focus and meaning to the bell tower, which she felt looked incomplete before.

"I would say the tower was unfinished," agreed Kanaga. "It was always intended to have a religious symbol on the tower, but the subject matter was undecided."

The roof for the bell tower was built on the ground. Before it was lifted to the top, a template was made of the platform and the bolts that would secure whatever symbol the church chose to install, Kanaga said. When Du Barry, an internationally known sculptress who has done work for the royal family of Monaco and the Vatican, was chosen, that template was shipped to her foundry in Pietrasanta, Italy.

Du Barry first executes a full-size clay sculpture, which is used to make a wax mold. Bronze is poured into the mold, and the statue is stabilized by a stainless steel skeleton. Once finished, the angel was crated and shipped by boat to Boston.

Du Barry will be at the church this Saturday, along with other artists whose works decorate the church, to celebrate the 10th anniversary. The public is invited to speak with the artists, Kanaga said. 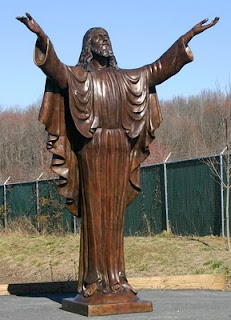 We've got our own Jesus, and he won't cost you a year's worth of tithings! Made of museum quality, hot metal cast bronze, he stands a full 7' tall and weighs about 450 lbs! Makes a great donation! Check him out here!

Posted by www.AllClassics.com at 2:49 PM