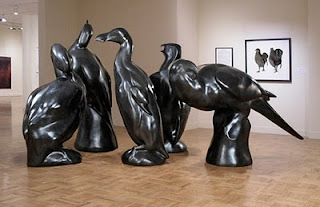 Starkly silhouetted against the Willamette River, five somber birds stand on a patch of grass at the southern tip of Tom McCall Waterfront Park. Elegant, melancholy and frozen in time, they silently invite passers-by to touch them, to take photos, to wonder where they came from.

From a distance, artist Todd McGrain, sporting a baseball cap and dirt-covered jeans, contentedly watched this week as people interacted with his larger-than-life sculptures.

Cast in blackened bronze, standing about 6 feet tall and weighing up to 700 pounds, the sculptures came from his studio in Ithaca, N.Y., where he's an associate art professor at Cornell University. Each one memorializes an extinct species.

The sculptures, presented by the Audubon Society of Portland and installed Wednesday, will remain for six months with the aim of raising awareness of the dangers facing today's bird populations.

"Once you know something of the life of that species, you realize that not having it in the world is a huge loss," McGrain said. That realization, in turn, is meant to provoke thought about human consumption of natural resources and disregard for the environment.

Nearly a third of the nation's 800 species are endangered or face significant threats, according to a 2009 report by the U.S. Fish and Wildlife Service, with climate change adding to long-standing threats such as hunting and deforestation.

"There have always been changes in climate," said Brad Bortner, Portland-based chief of Fish and Wildlife's migratory birds division. "But we're seeing an accelerating rate of change now."

McGrain made three identical sets of bird sculptures as part of "The Lost Bird Project" and has long wanted to display a set in Portland because of the city's progressiveness and social conscience, he said. But there was a practical reason, too.

"Right now, there's a great deal of stress on the environment of the West Coast, and we're at an important place to remember past losses," he said.

He contacted Portland's Audubon Society five years ago after finishing his first sculpture. "I thought it was intriguing back then, and I had only seen one photo of the passenger pigeon," said Executive Director Meryl Redisch, recalling her first chat with McGrain.

Portland's display includes a Labrador duck, shyly preening; a passenger pigeon, an iconic extinct bird; and the Carolina parakeet, stripped of its vibrant color but bending forward with curiosity. Next is the heath hen, which McGrain calls feisty; and a great auk, one he has a particular fondness for and finds hardest to describe.

"There's no single word for the great auk," McGrain said, brushing its surface clean with his hands. "He's a real character. Like a penguin -- just a really wonderful character."

After the birds end their Portland run, McGrain would like them to visit other West Coast cities. "L.A. and Seattle -- wherever they can find roosts," he said with a laugh. He's breaking up another set, permanently placing each sculpture where the bird was last seen. And he wants the third set, still in his studio, to tour the East Coast.

McGrain got to know the long-gone species by visiting museum specimens and studying their relatives' behavior. He kept a homing pigeon in his studio for six months. Before deciding on poses, he crafted about a dozen models of each bird.

The sculptures' dark, minimalist forms are meant to draw people in and to inspire them to seek more information about the lost birds. McGrain spent a lot of time sanding them to be seamless and tactile, he said, like a beach stone. He chose a matte black finish because of the way it absorbs light.

"They're like black voids," McGrain said, watching two young women taking photos of the birds. He plans to visit the sculptures regularly over the next few weeks, photographing the community's interaction with them.

Soon, a sign will go up to explain their meaning.

"The information will really make a difference," he said as a man approached the young women to ask if they knew anything about the birds. When they couldn't help, he strode toward McGrain.

It seems years of getting to know the creatures won't let McGrain forget their transitory nature.

"Well," McGrain began, gesturing toward his birds, "it's temporary." 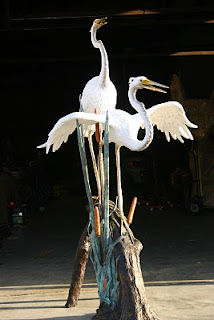 If you're in need of a beautiful bronze sculpture of a bird or birds, check out our selection of birds at our website!

Posted by www.AllClassics.com at 12:12 PM