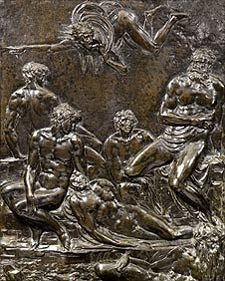 Bid made to save rare Pierino da Vinci sculpture
An effort to keep a bronze artwork by Leonardo da Vinci's nephew in the UK is being made by banning its export.

Authorities hope the temporary measure will allowing funding for Pierino da Vinci's sculpture to be found.

The piece, which depicts a harrowing scene from Dante's Inferno, has a recommended value of £10m.

Part of the Devonshire collection, it has been called "a treasure of the utmost importance" by the Reviewing Committee recommending the ban.

The sculpture, which was once thought to be the work of Michaelangelo, will not be able to be exported until September.

If serious interest in purchasing the artwork is shown, it is likely to be extended until June 2011 to finalise any deal.

Bids from public bodies for less than the recommended value will be considered by culture minister Ed Vaizey.

The bronze sculpure, a rare work by Da Vinci's nephew, was made during the 16th Century, and was brought to England one hundred years later.

Pierino da Vinci died in Pisa in 1553 aged just 24, but had been considered a successor to the talent of his illustrious uncle. 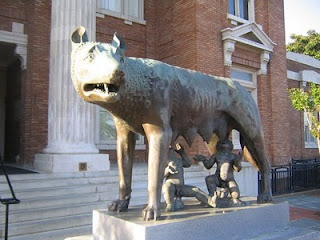 At bigbronze.com we have many classically styled bronze works in-stock and special order, so if you want to add a bit of roman art to your home without the pricetag of an original come check us out!

Posted by www.AllClassics.com at 12:07 PM