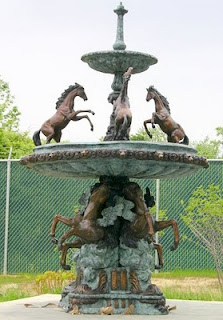 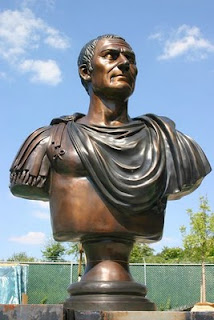 As stated on wikipedia:

Patina (pronounced /ˈpætənə/ or /pəˈtiːnə/) is a film on the surface of bronze or similar metals (produced by oxidation over a long period); a sheen on wooden furniture produced by age, wear, and polishing; or any such acquired change of a surface through age and exposure. On metal, patina is a coating of various chemical compounds such as oxides or carbonates formed on the surface during exposure to the elements (weathering). Patina also refers to accumulated changes in surface texture and colour that result from normal use of an object such as a coin or a piece of furniture over time.

Patinas are restricted to exposed surfaces and are fragile (that is, they can flake off). One reason bronze is so highly valued in statuary is that its patina protects or passivates it against further corrosion. This natural patina is solid and seldom shows a tendency to flake. Brass is also resistant to corrosion, but it is, in the long run, not as attractive since local pitting shows against the shiny background.

The green patina that forms naturally on copper and bronze is often mis-named verdigris and usually consists of a mixture of chlorides, sulphides and carbonates. copper carbonate or copper chloride. Atacamite is another name for the patina compounds. Verdigris can be produced on copper by addition of vinegar (acetic acid) - such a verdigris is water-soluble and will not last on the outside of a building like a "true" patina.

One example of a patina is a green surface texture created by slow chemical alteration of copper, producing a basic carbonate. It can form on pure copper objects as well as alloys which contain copper, such as bronze or brass.

Artists and metalworkers often deliberately add patinas as a part of the original design and decoration of art and furniture, or to simulate antiquity in newly-made objects.

A wide range of chemicals, both household and commercial, can give a variety of patinas. They are often used by artists as surface embellishments either for color, texture, or both. Patination composition varies with the reacted elements and these will determine the color of the patina. For copper alloys, such as bronze, exposure to chlorides leads to green, while sulfur compounds (such as "liver of sulfur") tend to brown.

Posted by www.AllClassics.com at 9:39 AM