We can custom make any design for any player in bronze, contact us today for a quote. 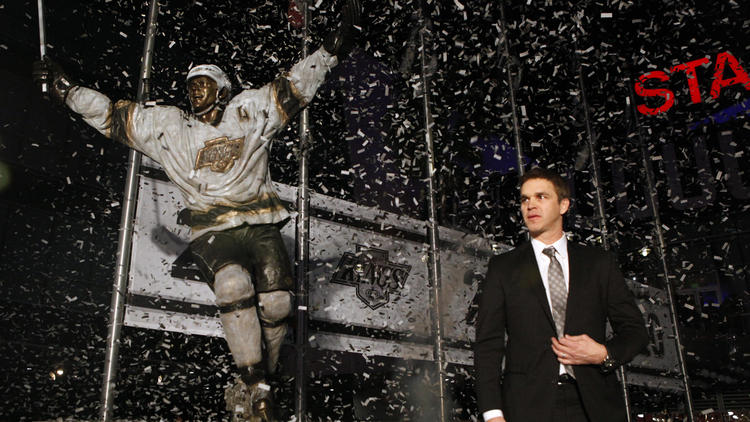 Finally there's a way to see Luc Robitaille when he's not in motion, rare for a man who always seems to be conducting a business meeting, embracing fans or rooting for the team that chose him in the ninth round of the 1984 draft despite warnings his lack of speed might outweigh his undeniable scoring touch.

For Kings coach, hello is easier than goodbye at trade deadline
On Saturday the Kings and parent company AEG paid tribute to the highest-scoring left wing in NHL history by unveiling a statue of Robitaille in Star Plaza, outside Staples Center. Robitaille, now the Kings' president of business operations, has played a huge role in the club's history: He's their all-time goal leader (557), ranks second to Dave Taylor in games played with 1,077, second to Marcel Dionne in points with 1,154, and their leader in game-winning goals (73) and power-play goals (210). Now, he truly looms large in the form of a bronze statue that measures 19 feet tall and weighs 2,500 pounds, including its inscribed granite base.

"It's very, very humbling," Robitaille said after a speech in which he thanked his family, fans and those whose statues already stood in Star Plaza, including speakers Wayne Gretzky and Jerry West.
Robitaille was the seventh person honored with a statue outside of Staples Center and first in more than two years. He joined former teammate Gretzky (2002), Lakers great Magic Johnson (2004), boxer Oscar De La Hoya (2008), the late Lakers announcer Chick Hearn (2010), West (2011) and Lakers great Kareem Abdul-Jabbar (2012).

"I know what Magic has meant to this city. Jerry West is the logo of the NBA and Kareem, I watched these guys," said Robitaille, who was inducted into the Hockey hall of Fame in 2009. "For me personally, what Wayne Gretzky means to me and meant to the world of hockey, to be amongst these guys is absolutely incredible."

The Kings and parent company AEG paid tribute to the highest-scoring left wing in NHL history by unveiling a statue of Luc Robitaille in Star Plaza, outside Staples Center, on Saturday night. (Genaro Molina / Los Angeles Times)
The statue was commissioned by Staples Center and AEG and was created by artists Julie Rotblatt Amrany, Omri Amrany and Itamar Amrany. Julie Rotblatt Amrany and Omri Amrany created the statues of Abdul-Jabbar, West, Johnson and Hearn. Robitaille said he didn't pose for the sculptors and saw the statue for the first time when it was unveiled in its silver-black-and-white glory, with his stick upraised and smile wide in a post-goal celebration. "I know my wife had a say in it," he said. "She made sure the chin was right. It's pretty awesome. It's pretty special."
Lee Zeidman, the president of Staples Center, said Saturday he had scouted several potential locations and the sculptors came back with mockups suitable for the spot. "We don't want to block ingress or egress or signage," Zeidman said.

There's no definitive process for choosing who's immortalized in bronze, according to Dan Beckerman, president and chief executive officer of AEG. There's also no timetable.
There are no set criteria, either, though most of the selections are obvious because of the impact the honorees had on the Kings and Lakers even before Staples Center existed. The debatable choice is De La Hoya, who fought at Staples Center only once, in 2000. His presence can be explained by a former business relationship: AEG in 2008 purchased a minority stake in De La Hoya's company, Golden Boy Promotions, though it sold that stake last year.

"We have a process that we go through with a Staples Center and AEG collaboration, where we look at potential candidates and evaluate them periodically," Beckerman said in a phone interview. "There's not a formal submission process. We talk with the teams and sort of come up with it informally with the management of Staples Center and AEG."
Robitaille was an easy choice.

"It's very, very humbling," Robitaille said of the statue in his likeness that was unveiled at Staples Center on Saturday night. (Genaro Molina / Los Angeles Times)
"I think we've all known that at some point Luc was going to get a statue," Beckerman said. "He clearly blows by any criteria we would ever set up in terms of his on-ice accomplishments, his off-ice accomplishments and how he really transcends the game for what he's done for hockey in Los Angeles. And really for the ambassador he's become and the leadership that he provides today. It wasn't a matter of if, it was a matter of when."

Staples Center and AEG pay for the statues and Staples Center maintains them. Robitaille joked that his mother, Madeleine, who died of cancer last May, "is going to make sure there's no pigeons on this thing."

Beckerman's office overlooks the plaza and based on what he has seen, the statues of Hearn and Johnson seem to be the most popular. He also said the statues have remained free of graffiti or other vandalism. "People are very respectful," Beckerman said. "I love seeing people coming by, getting off tour buses and posing with the statues."

Who's next? Marcel Dionne? Kobe Bryant, after he retires? Shaquille O'Neal? And is there a cap on how many statues will stand there? Neither Beckerman nor Robitaille would be specific, but both said they expect to honor others in the same way.

"There are no limits, just the physical constraints of Star Plaza," Beckerman said. "There's so many worthy candidates, and we continue to get more and more worthy candidates with every passing year."

The Kings' current success could lead to more hockey statues.
"I don't know yet. But I do believe that there's room for a few more people and the Kings have been so relevant," Robitaille said. "Staples Center wouldn't be here if it weren't for the Kings and there's a lot of people in the Kings organization that made a difference and certainly there's more room for Kings people, Kings players."

We are the largest designers, manufacturers and suppliers of monumental bronze sculptures in the world.  Contact us today for a quote to have your players created in bronze.  (302) 738-2190 Monday thru Friday, 9:00 am to 3:00 pm EST www.bigbronze.com, www.allclassics.com, www.bronze-mascot.com

Posted by www.AllClassics.com at 9:31 AM