By News from Elsewhere... ...as found by BBC Monitoring 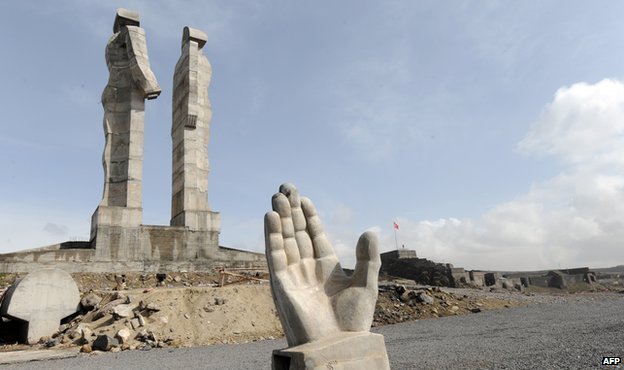 Turkey's president has been fined for making disparaging remarks about a statue in 2011.
President Recep Tayyip Erdogan, who was prime minister at the time, described the Statue of Humanity as a "monstrosity" and suggested it should be removed. The monument was designed to symbolise friendship between Turkey and Armenia, and featured two 30-metre-high human figures facing each other on a mountain above the eastern city of Kars, close to the border between the two countries. It was never completed, and was demolished a few months after Mr Erdogan made his remarks.
An Istanbul court has now ruled that the president must pay sculptor Mehmet Aksoy 10,000 Turkish liras ($4,000; £2,500) in damages, the Hurriyet Daily News reports. Mr Aksoy had sought 100,000 liras for the "insult" to his work, but Mr Erdogan's lawyer argued the comments were more of a critique. In 2014, the Turkish Language Association told the court that the word Mr Erdogan used - "ucube", which can be translated as monstrosity or freak - is not an insult. It said the exact meaning was "very strange and very ugly". Three places you can buy the most attractive sculpture, school mascots, bronze statues and monuments  at the best prices in USA, http://www.allclassics.com/
http://bigbronze.com/
http://bronze-mascot.com/
Posted by www.AllClassics.com at 10:41 AM