The Clark Gets the Bronze

But if you really want one that looks like an antique for small cost then call us and we can custom make any design you like from histories antiquities.
http://bigbronze.com/index.php?route=product/category&path=61

A set of bells from the eighth to seventh century B.C. Shanghai Museum
Williamstown, Mass.
When the Clark Art Institute showcased ancient Chinese artifacts and sculptures in 2012, it brought attention to a little-known facet of its founder: About a decade before he and wife, Francine, began collecting European and American art, Sterling Clark trekked through northwest China at the head of a scientific expedition. Last year, a selection of the institute's Impressionist paintings went on view at the Shanghai Museum. Now, more than 30 works from Shanghai's prized collection have come to the Clark in "Cast for Eternity: Ancient Ritual Bronzes From the Shanghai Museum."
The oldest is a simple 18th-16th century B.C. three-legged pot—a ding—used to heat food over a fire, its only decoration a band of threadlike circles and lines. By contrast, the most recent, a second-to-first-century B.C. cylindrical container for cowrie shells used as currency, features three-dimensional sculptures: Two tigers slink up its sides toward yaks crowding atop the lid. Six of them circle a central platform where a seventh beast looks out, neck outstretched, horns tilted back. It takes little imagination to hear his bellow.
As visitors step into the recently opened Tadao Ando building, "Cast for Eternity" is the first exhibit they encounter. It is as though the museum is announcing that, in enlarging its footprint, it has also permanently expanded its horizons to include China. Indeed, according to the show's lead curator, associate director Thomas J. Loughman, this is the first of multiple collaborations with the Shanghai Museum. 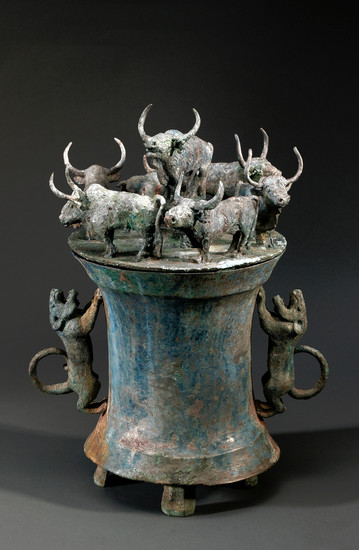 A second-to-first-century B.C. container for cowrie shells. Shanghai Museum
All save the cowrie-shell container played a role in ceremonial banquets held to honor ancestors. The set of nine bells hanging at the back of the gallery and the nearby drum base in the shape of three coiled snakes provided music, while the 29 vessels that make up the bulk of the show variously held wine, food or water. While not comprehensive, the show's selection manages to be wonderfully representative. The plethora of shapes immediately stands out, from variations on rounded pots and vases to an elongated flaring beaker (a gu), a houselike container for wine (fangyi) and a squared-off oval food dish (xu) with legs in the shape of big-headed humans. Like a number of other pieces, this xu has an ornamented lid that, when removed and upturned, becomes a footed dish.
As clever and elegant as these and other forms are, it is the vessels' surface decoration that proves most intriguing. This is where Chinese artisans excelled, achieving exquisite detail thanks to a multistep process that involved creating molds in sections before assembling them. If you look closely at some of the older pieces, you can see a vertical ridge where the molds met and some of the molten metal pushed through. As artists perfected the technique over the centuries, they produced vessels in which you can't detect the seam and other works where they ingeniously incorporated it into the design. In a 15th-to-13th-century B.C. vessel with lobed feet, the raised seams form the noses of taotie, a popular animal-mask motif usually recognizable by its protruding eyes and stylized body.
By displaying the works pretty much chronologically, Mr. Loughman moves us from the modest 18th-16th-century B.C. ding through some of the complex and layered decorative schemes on large vessels from the Shang dynasty (c.1600 B.C. to 1046 B.C.), then into the somewhat lighter, highly stylized designs of the Western Zhou (c.1046 to 771 B.C.) to finish with the more luxurious ornamentation and inlay work that characterize the Eastern Zhou (c.770 B.C. to 256 B.C.).
Among the highlights are a late Shang wine vessel with several kinds of surface decoration, including thin relief lines, sculptural buffalo heads and abstracted taotie that seem to vibrate with repeating swirls and spirals; a 10th-to-ninth-century B.C. ling, a large and rare type of lidded wine jug with a striking feather- or scalelike pattern; and a fifth-to-fourth-century B.C. vessel with lively scenes from everyday life—men hunting long-necked birds with bows and arrows, women picking mulberry leaves, musicians playing bells. These silhouetted figures are a dramatic departure from the abstracted designs of earlier periods. Cut into the metal and filled with copper, they resemble in style artworks from the northern steppes. (It is easier to pick them out with the help of the show's mobile app, which visitors can either download or access via one of the museum's iPads.)
Historians point to China's bronze age as laying the groundwork for many aspects of the Chinese social order and ritual life. But what also makes these works particularly relevant to art lovers is that, centuries later, scholar artists from the Song dynasty (960-1279) onward collected them, thereby reintroducing them into the flow of Chinese art history as prized works and sources of inspiration. The masterly examples on view at the Clark make it easy to see why.
Posted by www.AllClassics.com at 11:43 AM