SAND SPRINGS, Okla.—If Shan Gray ever gets his way, Lady Liberty will someday be looking up, figuratively, to an even loftier statue here in the Osage Hills outside of Tulsa. 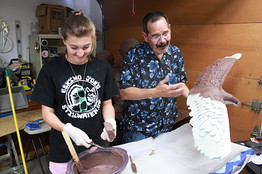 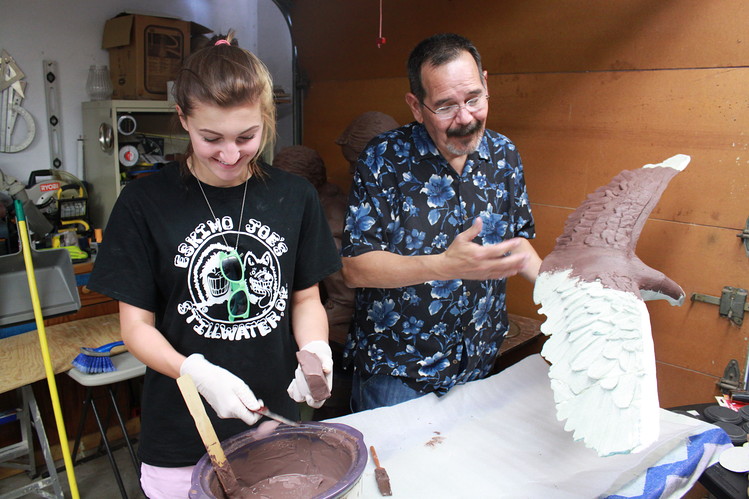 Miguel Bustillo/The Wall Street Journal
Shan Gray, right, with assistant Hunter Cobb, works on a clay-covered rendering of 'The American.'
Mr. Gray, a 57-year-old sculptor of Osage tribal heritage, is on a quixotic quest to erect a 217-foot-high bronze rendering of a Native American warrior with an eagle perched on his arm.
Titled "The American," the colossal work would be considerably larger than the Statue of Liberty, the nation's tallest statue, which is about 151 feet from torch to toes, not counting her pedestal.
Some Oklahomans are skeptical that Mr. Gray has the financial backing to bring his outsize vision to life. Others worry that his statue will tumble over in a tornado if he does. Mr. Gray remains resolute, convinced he can make the privately funded artwork a reality.
"The winds blowing through his hair are the winds of adversity, and he is facing east because the sun is coming up to mark a new day, a new beginning," he says, explaining the meaning behind his generic Indian warrior, deliberately designed to represent no tribe. 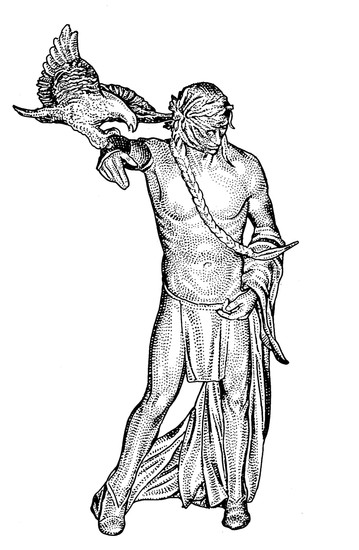 Model of 'The American'
In case the symbolism is too subtle, Mr. Gray aims to awe with sheer scale. The outer skin of "The American" would be composed of 3,600 bronze panels weighing in total more than 350,000 pounds. The eagle alone would have a wingspan of 103 feet.
Visitors would be able to enter at the base, board an elevator and ascend the sculpture. Herds of live buffalo would surround it.
Estimated cost: $34 million for the monument, $80 million for the full project, which would also include an amphitheater and educational center.
After years of scouring for sites and scrounging up financing, the Oklahoman sculptor has found a potential partner in Sand Springs, a city of around 19,000 people about 8 miles west of Tulsa. The town voted in June to study the cost of building infrastructure including roads to the monument. 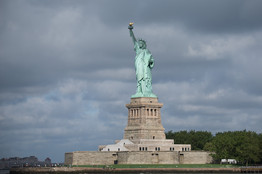 Kevin Hagen for The Wall Street Journal
The Statue of Liberty is the nation's tallest statue, at about 151 feet from torch to toes, not counting her pedestal.
The Sand Springs Home, an orphanage started by a philanthropic oil man here a century ago, is offering to donate 40 acres of hilly woodlands for the base of the statue, with an option for Mr. Gray and his investors to buy surrounding land, a trustee confirms.
Sand Springs Mayor Mike Burdge admits his initial reaction was, "How far would that thing fly in a 100-mph wind?" Backers promise it could handle a 200-mph tornado.
But around Tulsa, already home to the Golden Driller, a 76-foot statue of an oil worker, and to 60-foot praying hands outside of Oral Roberts University, he has come to see that "The American" may make a certain amount of sense.
"Some people out there would leave the road to go see the world's largest ball of twine, and that is not something I'd do," he says. "But we have to start working together to get these big projects built if we want Oklahoma to be a destination point."
Many Oklahomans remain dubious. Mr. Gray's statue proposal is well traveled at this point: He presented it to Oklahoma City early last decade, then Tulsa, but says he never found the right mixture of public support and available land before settling on Sand Springs.
"Of course it was tremendously expensive—they never did get anywhere in Oklahoma City," says J. Blake Wade, the head of a state authority building an unrelated but also high-price project, the American Indian Cultural Center and Museum. The ambitious museum, expected to cost $170 million, is under way with state and private financing but remains unfinished as backers seek $40 million from the state to help complete it.
Naysayers second-guess an economic consultant's projection that 1.5 million people per year would visit "The American"—or nearly 40% of Oklahoma's entire population.
Others are simply puzzled. "What is the point of it, are you trying to attract people to a casino?" says Geoffrey Standing Bear, a legislator in the Osage Nation, which ultimately decided not to contribute $2.5 million to the project. "I thought it was a waste of our money."
Mr. Gray says that if he wanted his statue to adorn a casino it would have been built by now. He says he thinks the statue would have special appeal in Oklahoma, which is home to dozens of Native American nations after many were relocated there in the 1800s by the government.
The sculptor, who estimates he has plunked $300,000 of his savings into the project, admits to fundraising setbacks after the recession.
But he remains optimistic, citing the struggles of Gutzon Borglum, who carved Mount Rushmore in South Dakota. It is now visited by more than two million people a year, according to the National Park Service.
Best known for public statues of famous Oklahomans, such as an 18-foot bronze  of Olympic gymnast Shannon Miller in Edmond, outside of Oklahoma City, Mr. Gray says he has always wanted to go big.
http://www.allclassics.com/american-indians-statues/giant-indian-statue

When his initial rendering of "The American"—an unsuccessful entry in a contest to top the state capitol dome—proved popular with readers in a newspaper poll, Mr. Gray says, his friend Robert Spring told him, "This is the one."
Mr. Spring, the owner of an oil-exploration firm, has since become an investor in the project, though he declines to say how much he has committed.
"It's a dream he had, a big dream, and anytime you can help with something like that, it becomes your dream too," Mr. Spring says. "It would be very good for Oklahoma."
So Mr. Gray keeps chipping away. He hopes to break ground on his masterwork soon, he explains from his home on a recent afternoon, as an 80-pound miniature of "The American" rests on his kitchen table.
He enters his garage, where he and an assistant are fashioning a new clay-covered model of the sculpture, with a slightly tweaked torso, better to hide the elevator.
"I'm working on this really big thing here," he explains, pointing out some tiny human figures at the statue's feet that illustrate its scale. "No one's going to get rich off this. But it's going to have legs."
FOR SOME OTHER AMERICAN NATIVE BRONZE STATUES see
http://bigbronze.com/index.php?route=product/product&filter_name=INDIAN&product_id=165
http://bigbronze.com/index.php?route=product/product&filter_name=INDIAN&product_id=165