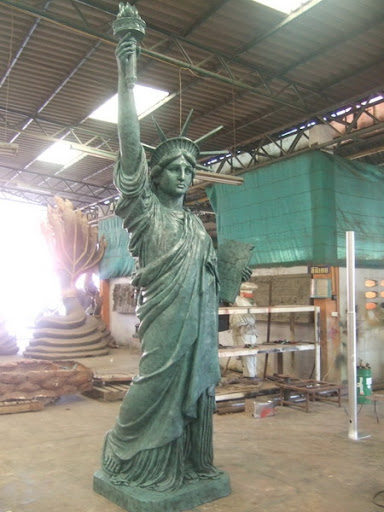 A tribute to Freedom and Liberty our sacred heritage.
Seems the interpretation changes with time. Moods and public desires swing like a pendulum back and forth. It always has to swing too far one way before the mood swings back again. I like the classic interpretation set forth in the Constitution of United States in 1776. This is one document that fits all for the best of all citizens. So lets restore liberty once again.
The Statue of Freedom

The bronze Statue of Freedom by Thomas Crawford is the crowning feature of the dome of the United States Capitol. The statue is a classical female figure of Freedom wearing flowing draperies. Her right hand rests upon the hilt of a sheathed sword; her left holds a laurel wreath of victory and the shield of the United States with thirteen stripes. Her helmet is encircled by stars and features a crest composed of an eagle's head, feathers, and talons, a reference to the costume of Native Americans. A brooch inscribed "U.S." secures her fringed robes. She stands on a cast-iron globe encircled with the words E Pluribus Unum, the national motto at the time of her placement atop the dome.

The lower part of the base is decorated with fasces and wreaths. Ten bronze points tipped with platinum are attached to her headdress, shoulders, and shield for protection from lightning. The bronze statue stands 19 feet 6 inches tall and weighs approximately 15,000 pounds. Her crest rises 288 feet above the east front plaza.

A monumental statue for the top of the national Capitol appeared in Architect Thomas U. Walter's original drawing for the new cast-iron dome, which was authorized in 1855. Walter's drawing showed the outline of a statue representing Liberty; Crawford proposed an allegorical figure of "Freedom triumphant in War and Peace." After Secretary of War Jefferson Davis objected to the sculptor's intention to include a liberty cap, the symbol of freed slaves, Crawford replaced it with a crested Roman helmet.

Crawford was commissioned to design the Statue of Freedom in 1855 and executed the plaster model for the statue in his studio in Rome. He died in 1857 before the model left his studio. The model, packed into six crates, was shipped from Italy in a small sailing vessel in the spring of 1858. During the voyage the ship began to leak and stopped in Gibraltar for repairs. After leaving Gibraltar, the ship began leaking again to the point that it could go no farther than Bermuda, where the model was stored until other transportation could be arranged. Half of the crates finally arrived in New York in December, but all sections were not in Washington until late March of 1859.

Beginning in 1860, the statue was cast in five main sections by Clark Mills, whose bronze foundry was located on the outskirts of Washington. Work was halted in 1861 because of the Civil War, but by the end of 1862 the statue was finished and temporarily displayed on the Capitol grounds. The cost of the statue, exclusive of installation, was $23,796.82. Late in 1863, construction of the dome was sufficiently advanced for the installation of the statue, which was hoisted in sections and assembled atop the cast-iron pedestal. The final section, the figure's head and shoulders, was raised on December 2, 1863, to a salute of 35 guns answered by the guns of the 12 forts around Washington.

The plaster model of the statue, which had been in storage for 25 years, was reassembled and restored in the basement rotunda of the Russell Senate Office Building, where it was returned to public display in January 1993. In late 2008 the model was relocated to the new Capitol Visitor Center, where it is now a focal point of Emancipation Hall.

On May 9, 1993, after almost 130 years in place, the bronze statue was removed from its pedestal by helicopter for restoration. The work was needed because of extensive pitting and corrosion on the surface of the bronze and because of a crack and rusting on the cast-iron pedestal. The project was guided by the recommendations of a thorough conservation and engineering study conducted in 1991. The United States Capitol Preservation Commission provided $780,000 in privately raised funds, which covered all project costs.

The disfiguring caulk and much of the corrosion were removed by water blasted at medium pressure. Repairs to the statue included the insertion of over 700 bronze plugs in the most significant pits; bronze patches were also inserted where needed. Rusting original iron elements and the interior paint were removed. The bronze, which varied in composition and condition, was painstakingly repatinated to the "bronze green" noted in early records. Finally, layers of acrylic lacquer and wax were applied to protect the surface against further corrosion, and small gaps were sealed with caulk.

The cast-iron pedestal was restored in place atop the dome. The metal was stripped of paint, and the wreaths and fasces were removed to ensure that they were thoroughly cleaned and coated. The crack was permanently repaired, and the entire pedestal was primed and painted with a color specially mixed to match the statue.
Posted by www.AllClassics.com at 9:51 AM