This Gift to Tufts Isn’t a White Elephant Exactly, even bigger than www.bigbronze.com or www.allcassics.com elehants 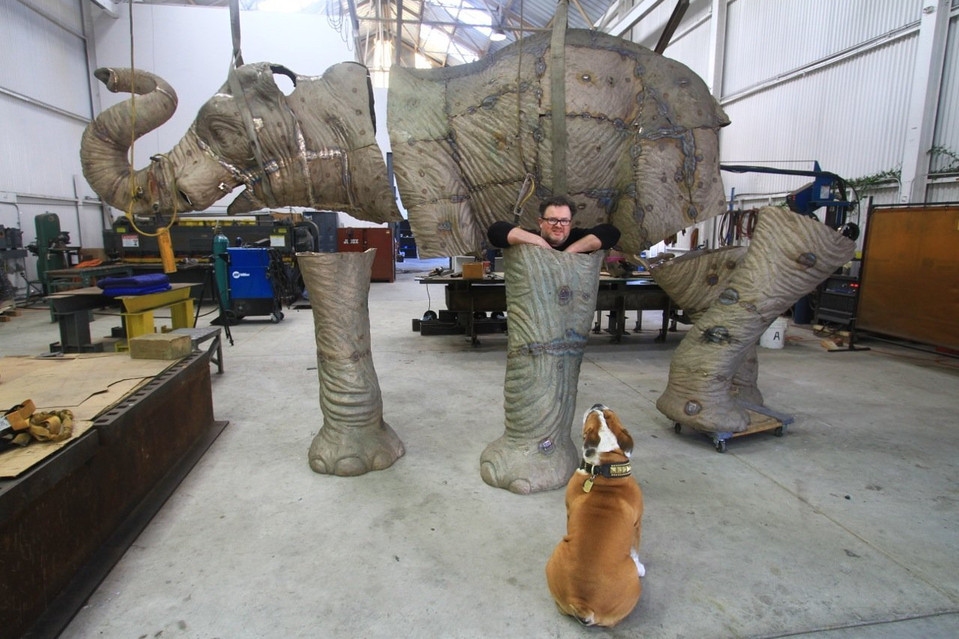 ENLARGE
Sculptor Steven Whyte poses with the new bronze statue of Jumbo as it is being assembled. Steven Whyte Studios
By
Melissa Korn
Updated Dec. 18, 2014 6:14 a.m. ET
8 COMMENTS
When Dick Reynolds contemplated a six-figure gift to Tufts University, he knew it wouldn’t be enough for a new building or even a wing. But he was thinking big.
So he commissioned an 11- by 18-foot bronze statue of the school mascot, P.T. Barnum’s storied elephant named Jumbo.
The actual stuffed hide of the great beast—a 19th-century animal superstar—had been displayed on the Medford, Mass., campus for decades. Students would stuff pennies in his trunk for good luck before exams. But, in 1975, the real Jumbo was lost in a fire.
A papier-mâché and concrete replacement from a local amusement park served as a cheeky stand-in beginning in the 1990s. Mr. Reynolds aims for something more grand, and more authentic, with his 5,000-pound gift to his alma mater. 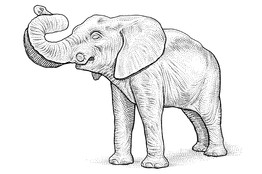 Jumbo statue model
“To know that we’re going to have one that looks like a real elephant, I think that’s important,” says Mr. Reynolds, class of ’67. “This thing was one god-awful, ugly, gray elephant.”
Jaw-dropping donations are common enough at top universities, including a record $350 million gift to Harvard University earlier this year.
But schools also get their share of unusual legacies, reflecting their graduates’ idiosyncratic interests. In 2005, DePauw University in Indiana received a rhinestone-encrusted deer statue, even though the school’s mascot is a tiger.
A wealthy shipbuilder gave Roger Williams University in Bristol, R.I., and two other New England schools a cruise ship in 2006. But after trying, the schools weren’t able to sell the 137-foot Niagara Prince and gave it back.
And venture capitalist Brad Feld in 2007 gave the University of Colorado in Boulder $25,000, stipulating that a plaque in his honor be placed outside a men’s restroom. (It reads: “The best ideas often come at inconvenient times—Don’t ever close your mind to them.”)
The new Jumbo’s journey to Tufts—125 years after the original arrived—has hit some snags. The school staged an art exhibition, scheduled presentations on circus history and commissioned a book, preparing for Jumbo’s arrival at homecoming this fall.
But the statue’s creation—a complex process that includes hard industrial foam, rubber molds, reinforced ears, tail and trunk and a road trip from California—is coming along at a snail’s pace.
It is now expected to make its campus debut in the spring. 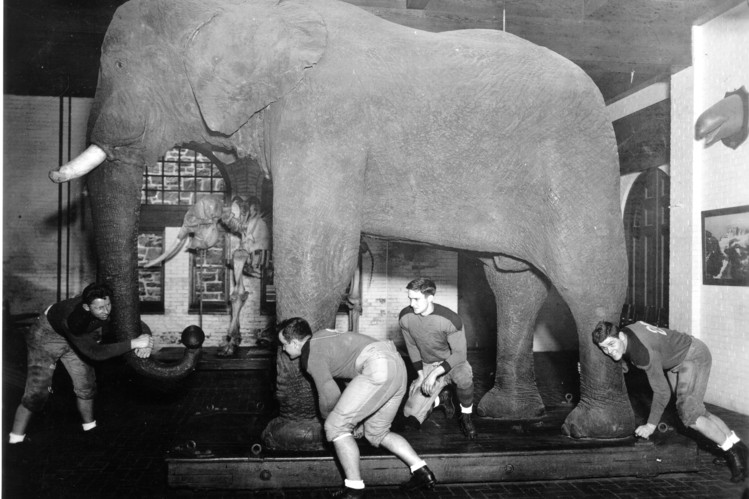 ENLARGE
The mounted hide of P.T. Barnum's elephant, Jumbo, at Tufts University near Boston, with members of the school's football team in 1935. Tufts University
Mr. Reynolds’s gift is itself the result of an unusual bestowal by Barnum, the famed showman and founding Tufts trustee, who donated funds for a science building and natural history museum at the school. In 1889, he capped those donations with Jumbo’s stuffed hide.
The original Jumbo went down in flames in a fire that gutted the building; some of his ashes are now held in a peanut-butter jar in the athletic department.
For the past two decades, Tufts students have posed next to and played with what was meant to be a temporary replacement, the cartoonish papier-mâché statue bought by the class of 1958 for $4,500 from the now-defunct Benson’s Wild Animal Farm amusement park in Hudson, N.H.
“He was never meant to live that long,” says Elaine Kasparian, who helped lead that effort, which included an additional $35,000 for transportation and landscaping.
The amusement park Jumbo was actually an Indian elephant, not an African one. The two are quite different. The African elephant is much bigger in body, ears and tusks, and has a different head shape. The elephant’s tail fell off a few times, a casualty of student horseplay and old age. And the beast needed an annual paint job.
That Jumbo has since been retired, though Ms. Kasparian declined to say how. “He went to heaven,” she says.
The benefactor Mr. Reynolds, who worked mostly in commercial real estate and served as vice president of operations at the university for three years, says his landscaping and other efforts to spruce up the campus were always well received. He decided on the donation in 2012.
“Other colleges have generic bobcats and empty symbols as their mascots. We, on the other hand, have what is arguably the most famous animal in the world,” says Andrew McClellan, an art history professor who wrote a book called “Jumbo: Marvel, Myth, and Mascot,” after collecting material for years.
Artist Steven Whyte used archival pictures and zoo visits to create small models of the elephant before beginning work on the full-size statue at his studio in Carmel-by-the-Sea, Calif. He first built a steel skeleton of the elephant, covering it in hard foam and then about 3,000 pounds of clay.
Individual parts, including the trunk, ears, tail and jaw, were covered with a rubber product before being topped with a fiberglass and plaster mold. The first coat of rubber, costing about $15,000, didn’t set properly and needed to be scrapped, putting the project well behind schedule.
Mr. Whyte also says he underestimated the animal’s size by more than 100 square feet, so he’ll lose about $25,000 on the elephant.
“It seems to be in keeping with the tragic life of Jumbo, that things didn’t go smoothly,” Mr. Whyte says.
Jumbo was captured in Africa in 1862, when he was just a year old, according to Mr. McClellan’s book. Among the first African elephants to reach Europe, Jumbo became a featured attraction at the London zoo, until P.T. Barnum bought him for $10,000 and brought him to the U.S. in 1882.
Jumbo, whose name became synonymous with huge, was the biggest draw of the Greatest Show on Earth. His likeness was used on toys, playing cards and popcorn tins and pictured in ads for everything from soap to suspenders.
Just three years into his U.S. circus career, Jumbo was hit and killed in Canada by an unscheduled freight train in Ontario in 1885.
Now, Jumbo’s finished bronze pieces are being assembled at a Berkeley, Calif., foundry.
Mr. Whyte says he and his team are working through a “very difficult, 50-piece jigsaw puzzle, with each piece weighing 100 pounds.”
Though many students are looking forward to taking selfies in front of the new statue, some are stamping their feet, disappointed that Tufts accepted the gift.
“Jumbo is one representation of money not being prioritized in a way that we think it should be,” says Lior Appel-Kraut, a sophomore and president of the Tufts Labor Coalition, which has held demonstrations supporting the rights of adjunct instructors and custodial workers.
School officials are disappointed about the holdup but say the wait will be worth it.
“It’ll get here when it gets here,” says Mr. McClellan. “It is going to be a big deal.”
www.bigbronze.com and www.allclassics.com make similar or bigger elephants for much lower cost
http://bigbronze.com/index.php?route=product/product&filter_name=elephant&product_id=202
http://www.allclassics.com/category/bronze-wild-animals/page/2
https://plus.google.com/photos/102988372928778833247/albums?banner=pwa
Posted by www.AllClassics.com at 10:58 AM