http://online.wsj.com/news/articles/SB10001424052702304181204579371464010790606
For those who are not $millionaires you can always shop at www.bigbronze.com and www.allclassics.com to find bargain hand crafted bronze sculpture. Many are artist exclusives designed and made by owner Darren Hussey. 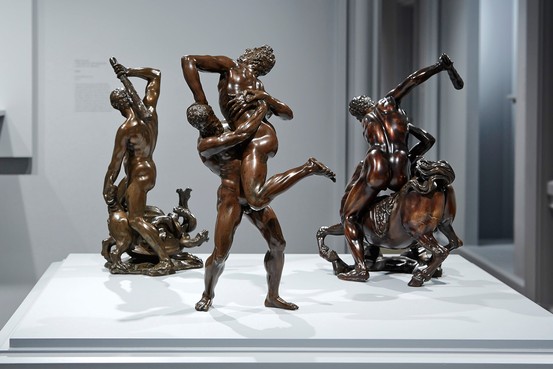 The labors of Hercules from the Hill Collection, including 'Hercules and Antaeus' at center. Michael Bodycomb
New York
When J. Tomilson Hill, vice chairman of the Blackstone Group, was growing up along Fifth Avenue, he would enjoy visiting Henry Clay Frick's collection of bronzes at the Frick Collection. "They were accessible," he recently observed to the Frick's director, Ian Wardropper. "You could actually walk around the tables in the main rooms and see how the Turner or the Rembrandt interfaced with the bronzes there."
Renaissance
And Baroque Bronzes From the Hill Collection
The Frick Collection
Through June 15

Those early experiences profoundly influenced Mr. Hill. For the past two decades, he and his wife, Janine, have collected Renaissance and Baroque bronzes, as well as Old Master and postwar paintings. Their bronzes, which include superb works by masters of the Italian, French, German and Dutch schools, have never been shown publicly—until now.
Through June 15, the Frick is exhibiting all 33, including statuettes, larger sculptures and a bas-relief, together with several works from the Hills' other collections. The exhibition was organized by the Frick's curator of Renaissance painting and sculpture, Denise Allen. And she, along with other scholars, has contributed entries to the sumptuous and rigorously documented exhibition catalog. Emulating the accessibility of the Frick's own bronzes, the Hills have allowed theirs to be displayed without vitrines, enabling viewers to examine each work in great detail.
Reflecting European sculpture's embrace of mythology, religion, history and allegory, as well as the sculptors' keen interest in human and animal anatomy, the bronzes provide a wealth of imagery and points of comparison from the moment you arrive. Facing one another in the foyer between the lower-level galleries are two striding figures, each with wonderfully expressive hands: "Mars" (c.1600-08), by the Florentine Antonio Susini, shows the burly yet graceful musculature and refined facial expression typical of the Italian Renaissance ideal. Probably cast in the late 1560s, "Mars Gradivus," by Willem Danielsz. van Tetrode, with its wild hair, flowing mustache and heavier musculature, evokes the somewhat less elegant Northern European male ideal, which we also find in the works of Albrecht Dürer, Jan Gossaert and others.
Both figures symbolized princely power, especially in times of war. Both statuettes were produced in Florence and influenced by the Flemish-born sculptor known as Giambologna, who became a leading Florentine figure and is something of an overriding spirit in this exhibition. Susini was Giambologna's chief assistant, and his "Mars" reproduces Giambologna's model of c.1565-70. Tetrode is assumed to have composed his Mars in Florence just when Giambologna was working on his.
"Bronze," notes Ms. Allen, "is a reproductive medium," meaning that these works in metal represent the final stage in a process that begins with an artist's original model in clay or wax and proceeds in stages to the casting, sometimes by the same artist, sometimes by another. The Hill collection includes some of the finest examples of works extant in multiple castings. 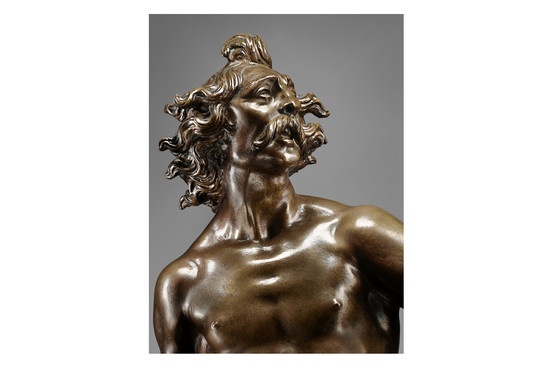 A detail of 'Mars Gradivus' by Willem Danielsz. van Tetrode Maggie Nimkin Photography
The exhibition reveals how the medium's reproductive nature fostered a constant exchange of ideas between sculptors. Susini's "Rape of a Sabine" was cast c.1585, roughly two years after Giambologna completed his celebrated marble original. Their richly lacquered patination gleaming, Susini's three intertwined figures create a vortex of activity based on a spiraling configuration that Giambologna had invented years earlier to produce sculpture without a single dominant viewpoint.
Giambologna's own bronze statuette of "Astronomy," an elegant female allegory cast in the early 1570s, represents an earlier stage in his invention of the "serpentine figure." Leaning on a plinth and resting her foot on a celestial globe, she twists like a flame, her pose balanced and beautiful from any angle.
We also see this flamelike twist in the epic wrestling match of "Hercules and Antaeus," cast by Susini's nephew Gianfrancesco between 1625 and 1650. It had initially been designed by Giambologna as part of a set of silver groups, now lost, representing the Twelve Labors of Hercules.
Half a century later, this twist imparts the energy of a coiled spring to the human and animal figures in "Hercules and Iolaus Slaying the Hydra" by Giuseppe Piamontini. Cast c.1700-20, Piamontini's bronze was based on a lost model of c.1630 by the great Bolognese sculptor Alessandro Algardi. Apart from the eloquent rendering of the heroes' faces, Piamontini subtly worked the intricate bronze surfaces to emphasize the varied textures of heroic flesh, animal skins and especially the Hydra's powerful claws and multiple serpent heads.
More lyrical bronzes offer a respite from all this bellicose muscle. "Ceres and Bacchus" (c.1635-40) by Ferdinando Tacca shows the goddess of agriculture walking in quiet conversation with the god of wine and revelry. As they smile demurely at each other, Bacchus offers his companion a cup of godly vintage. The two figures gently drape their arms around one another, their affectionate gesture linking the masses of the two figures so that their metallic weight is securely reinforced and balanced.
The Hills' sacred works are displayed in their own room and dominated by Algardi's cast of his 1646 "Cristo Vivo," which we view as the sculptor intended, from below, as in a church. A masterpiece of graceful Baroque pathos, it shows the crucified Christ resigned to his suffering, his open mouth and lowered eyelids suggesting the final moment of supreme exhaustion. Nearby is the glazed terra-cotta "Crocifisso" (Christ on the Cross, 1950-52) of Lucio Fontana, and as one's eye darts between it and the Algardi bronze, Fontana's Christ figure seems to emerge from the ceramic folds of this polychrome abstraction. The gilt-touched swirl of reds, yellows and blues of "Crocifisso" echoes similar elements in the superb oil sketch of the "Assumption of the Virgin" (c. 1620) by Peter Paul Rubens hanging across the room. These fervent works proffer a quiet but grand finale to this resplendent show.
Mr. Scherer writes about music and the fine arts for the Journal.
Posted by www.AllClassics.com at 11:01 AM