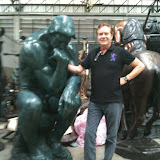 As we enter 2011 so begins another run on commodities prices including copper the dominate metal in Bronze sculpture and statues. So signals the end of bargain bronze sculpture affordable to the middle class in USA. The bargain bronze sculpture reached its high watermark in the early 21st century around 200 to 2006. The ability for American artist to design a sculpture and have a foreign foundry make the molds and casting at low labor rates made sculpture affordable to anyone who desired it. Going into 2007 and 2008 copper prices multiplied as did energy costs used in making and transporting the statues and fountains. The costs and end user price doubled and tripled. In spite of world economic slowdown the costs have still remained higher.
As we enter into 2011 Copper costs have reached a record high at $4.44 a lb beating the 2008 high by a full dollar. A predicted fuel increase to over $100. a barrel will also double the cost of shipping a 40ft sea container from Asia making cost rise even more.
The high inflationary rates are mostly a reaction to Obama's QE2 or Quantitative Easing two economic plan that devalues the US dollar. In short the dollar is worth less so overseas sellers want more of them. Another great loss for the middle class of America.
Posted by www.AllClassics.com at 9:45 AM