Philadelphia Museum of Art gets a giant plug 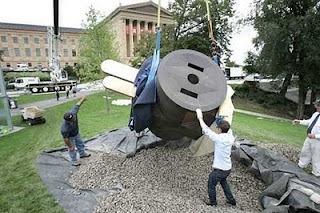 Philadelphia Museum of Art gets a giant plug

It dangled high in the air, a connector seeking a connection, before slowly being lowered into the waiting earth.

At 11:45 this morning, the Philadelphia Museum of Art was at last plugged in.

After hours of maneuvering and digging and pondering, the museum installed the latest addition to its outdoor sculpture garden, a gift from collector and philanthropist David Pincus - Claes Oldenburg's Giant Three-Way Plug, Scale A, a nearly 10-foot long electric plug, a cube tap grown to monstrous proportions, now protruding from a grassy knob outside the museum's west entrance.

Dating from 1970, the plug is the second colossal outdoor sculpture fashioned by Oldenburg using everyday objects as inspiration. (The first was his Lipstick, installed at Yale University in 1969.)

Pincus, 83, who watched Wednesday's installation for hours, acquired one of three big plugs (the other two are at the St. Louis Art Museum and the Allen Art Museum, Oberlin College), early in the 1970s and, with the artist's assistance, installed it in his Wynnewood backyard.

He remembers Oldenburg coming down from New York to help install the piece so many years ago.

"We had a wonderful time," Pincus said. "We were digging in the backyard. Even Oldenburg. He loved fresh fruit and my wife went out to get him some. He did some drawings in a little book."

Now Pincus has given the piece to the art museum in honor of Anne d'Harnoncourt, the museum's late director. The sculpture garden, which began with a sheaf of works by Isamu Noguchi, will be named in d'Harnoncourt's honor at a Sept. 7 ceremony.

"I'm sure Anne would be delighted with what they've done with the garden," said Pincus, now 83. "She was something special."

Will he miss seeing the plug as he strolls behind his home?

"My kids will," Pincus said, as he watched the crew of workers from Atelier Art Services, the Philadelphia firm that stored and moved the piece prior to its installation.

"'Dad, don't do that!'" Pincus said his grown children urged. "But art is for enjoyment. You have it in a lifetime. It doesn't belong to you."

Oldenburg, who couldn't make it down from New York for the Wednesday dig and drop, said the concept for the plug, made of Cor-Ten steel and bronze, was actually architectural.

"The plug looks very much like a building," he said, describing the form. It is actually set into the earth, like a building rising from a subterranean foundation.

"There was also the idea that this might have fallen from outer space," said Oldenburg. "It has no base, no platform." In fact, he said, it appears to have "fallen and created its own hole in the ground."

With the addition of the plug to the art museum's sculpture garden, there will be three high-visibility outdoor Oldenburgs in Philadelphia. A fourth is coming next year, a 50-plus foot paint brush rising from a plaza - yet to be constructed - next to the Pennsylvania Academy of the Fine Arts, across North Broad Street from the new convention center extension.

There is no question that Philadelphia is now the center of public work by Oldenburg, who is known for creating mammoth renderings of everyday objects. The first two works installed in the city were Clothespin, erected at the Centre Square office development, 15th and Market Streets, in 1976; it was followed in 1981 by the University of Pennsylvania's Split Button. 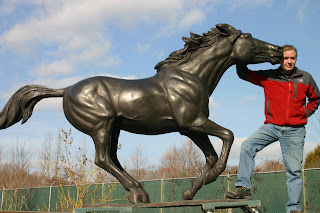 If you need a large bronze statue, sculpture or fountain for your museum, school, park, or workplace, we've got you covered! Check out our website http://www.bigbronze.com for all of our great pieces, all at wholesale pricing.
Posted by www.AllClassics.com at 1:51 PM