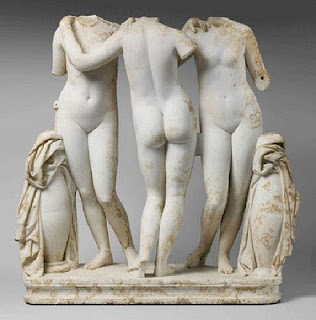 New York, NY -- An ancient Roman group statue of great importance and beauty - a depiction of the Three Graces of Greek mythology - has been acquired by the Metropolitan Museum of Art. The marble sculpture is a Second Century AD Roman copy of a Greek work from the Second Century BC. Discovered in Rome in 1892, the statue has been on loan to the museum from a private collector since 1992, and has been on view in the center of the Leon Levy and Shelby White Sculpture Court since it opened in 2007.

In making the announcement, Thomas P. Campbell, the museum's director, commented on the history of the composition: "The charming dancelike pose of the Three Graces - who stand in alternating front and back view, with their hands on each other's shoulders - is one of the most famous and enduring compositions known from antiquity. It was first developed in the Second Century BC, continued in popularity in the Renaissance, and has been influential during every subsequent period of Western European art. Thanks to the generous support of several trustees and other good friends of the institution, we are delighted to announce the addition of this superb, extremely well-preserved and beautifully carved work to the Met's encyclopedic collection, where it will continue to delight and inspire future generations."

The sculpture is on view in the center of the Leon Levy and Shelby White Court, where it is displayed with other Roman sculptures derived from classical and Hellenistic models.

The Three Graces are Aglaia (Beauty), Euphrosyne (Mirth) and Thalia (Abundance). They bestow what is most pleasurable and beneficent in nature and society. In mythology, they play an attendant role; their closest connection is with Aphrodite, whom they serve as handmaidens. For ancient authors, the triad also served as an allegory for the cycle of giving, accepting and returning favors, which were described by the ancient Roman philosopher Seneca as the "chief bond of human society."

After its discovery in Rome in 1892 near the ancient Forum of Nerva and Vespasian's Temple of Peace, this sculpture entered the collection of Joachim Ferroni and has since attracted much scholarly attention.

The Three Graces traditionally are shown as nudes with water jars covered by drapery at their feet, a representation that ultimately derives from the famous classical statue of Aphrodite by Praxiteles located at Knidos. 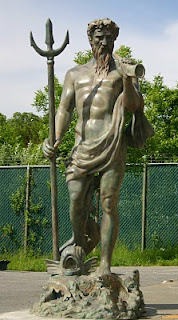 If you're looking for a classical piece to adorn your landscape or home we can help!
We have a great selection of Roman and Greek inspired pieces that are sure to add elegance to any location. Check out our website for our full inventory!

Posted by www.AllClassics.com at 10:01 AM